For those of you who don’t know, I am a drummer, having played the drums ever since discovering my dad’s old kit in the attic in 1959 (the year I left school!) During the 1960s and 70s, I was involved with several rock bands – Pentworth’s People, Originn and Squidd to name a few. It was an amazing time and I was fortunate to support some now “big names”, such as Eric Clapton and Deep Purple, and I played the first Glastonbury Festival – out of sight man!


Although my band’s performed rock music, I loved jazz (I’d spent a lot of time listening to my dad’s jazz records) and I always tried to include its rudiments into my playing. Oh, how I would have loved to have played like my heroes, the legendary American drummers of the jazz age, Buddy Rich, Joe Morello and Gene Krupa – an impossible task of course!


Have you seen the 1959 biopic ‘Drum Crazy’ (aka The Gene Krupa story) in which Krupa plays a solo around a series of water pipes in a boiler room?

Well, I once tried this myself while drumming for the Milneburg Six, a local trad jazz band, during a pub gig. I worked my way around this and that, eventually putting in some stick work on my full beer glass that stood on a side table … the glass shattered with resounding affect, showering me and the kit with beer and glass fragments – what pratt I made of myself!

Anyway, you can imagine then how amazed I was when, a few years after having sat down at the kit for the first time and having endlessly played Gene Krupa records, my French brother-in-law Jean-Paul Gilles announced that he was a drinking partner of the great man himself! Jean-Paul was one of life’s high-flyers. Literally! He was an executive of Air France, stationed in New York City, with my sister Beryl and niece Maureen.

Jean-Paul and Krupa’s drinking haunt was the famous Metropole Café, a jazz club, in New York. 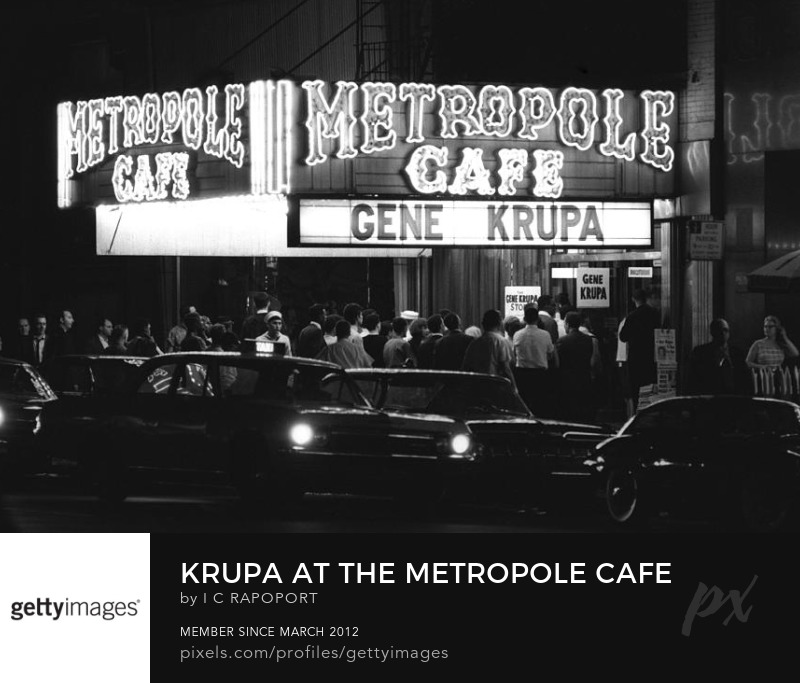 On a visit in 1965, my brother-in-law took me to the club, and being well-acquainted with the owner, soon found himself saying to him that his nephew was a drummer. Before I knew it, the on-stage drummer was turfed from his seat and I was told to play instead!  I ended up doing three nights with a band called The Detours!


Sadly, I didn’t get to meet my hero, because he was out of town at the time, but Jean-Paul did bestow this signed photo upon me: And now finally I get to the point of my blog, the inspiration for my painting, ‘Drumboogie’. Well, that came from Krupa, who had studied African tribal drum rhythms! My fantasy versions of an elephant and rhinoceros can be seen almost dancing to the evocative rhythm laid down by the duo of four-armed drummers in a parched African landscape. I will leave you with a video of my hero, playing the track ‘Drumboogie’ at the Metropole Café in 1965: