In the Bleak Midwinter

Like many living in the western world, I was brought up on a diet of Christian hymns and carols - we sang them at school, we sang them in church and we sang them at Christmas celebrations and gatherings.  Several of those seasonal songs became favourites of mine, including:

- ‘I saw Three Ships’ - which I recorded a rock version of in 2014 with Jeff Scheetz, Oliver Wakeman, Bob Catley, John Payne and Pete Coleman;
- ‘God Rest Ye Merry Gentlemen’ - earmarked for next year; and
- ‘In the Bleak Midwinter’ – which I recently illustrated with the intention of setting it to music.


Midwinter was very obviously going to be a snow scene, but of all the various snow images I’ve painted, this is the only one that actually depicts snowfall! The scene largely hangs upon the first verse which many of you will know:

I chose a medieval setting with a village and a towering church building, with a deliberate suggestion of vertigo prevailing. But what of the critters? I couldn’t use another “Mirador” elk-like beast, but then, remembering my trips to Scotland with my Scottish wife Sarah, I thought, ‘how about a couple of Heilan coos?’ (Highland cows to the Sassenach!)  We researched many images of Heilan coos (and yaks), until I came up with my own fantasy version – both the male and female’s horns are slightly exaggerated with barbs, and the heavier tails would in reality belong to a yak.

We also spent some time researching the words, the music and the history of this much-loved carol, and in doing so stumbled across some facts I did not know.  ‘In the Bleak Midwinter’ is based on a poem by the English poet Christina Rossetti, published in 1872 under the title ‘A Christmas Carol’: 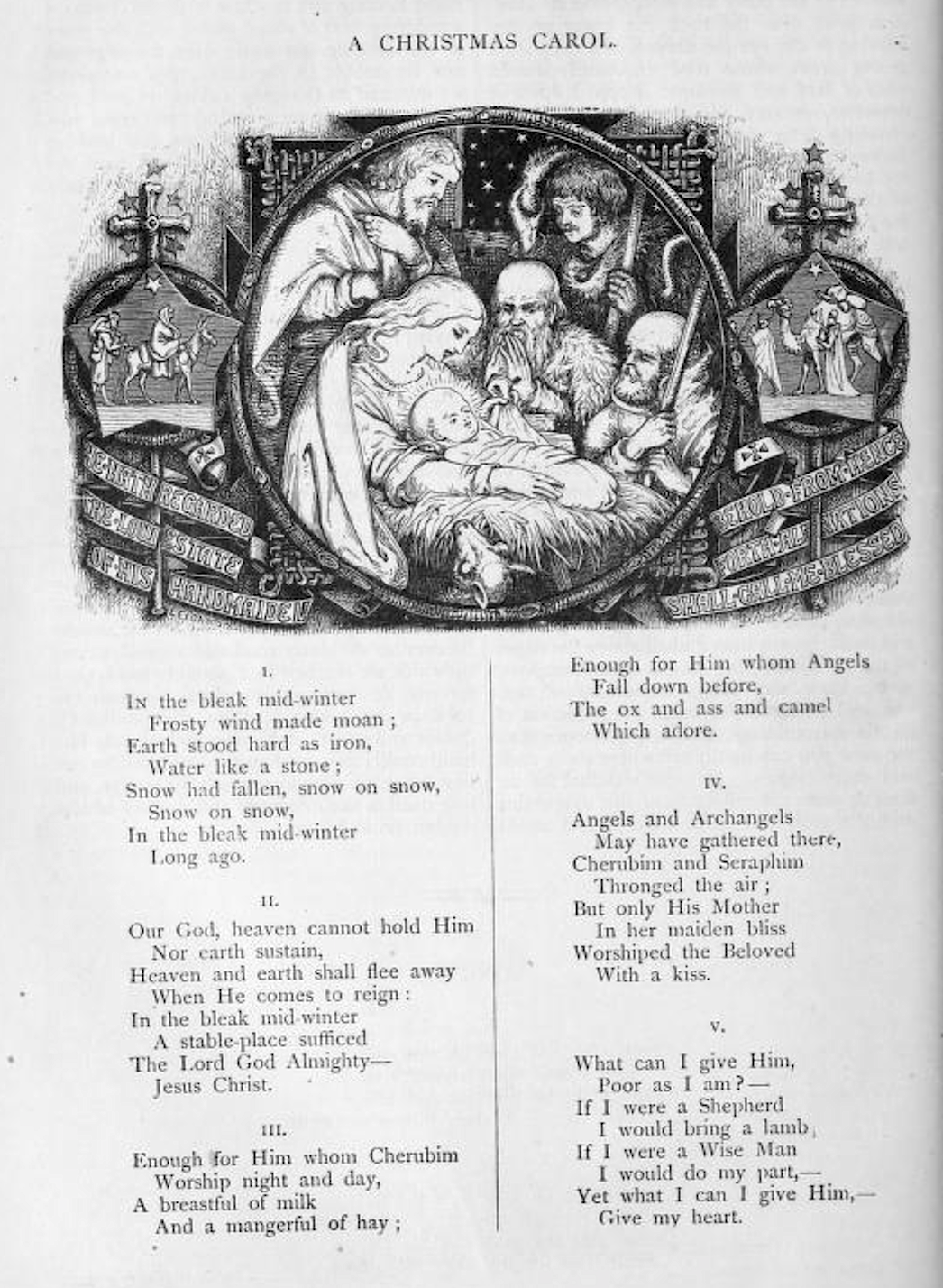 The poem first appeared set to music by Gustav Holst in the English Hymnal of 1906. Holst, of course, is best remembered for his composition 'The Planets', which incidentally is one of my own favourite works.  Speaking of the planets, "time" and "space" is all very good, but (and I’m not sure I’ve said this before) in many of my images I attempt to include a third element, that of "eternity", examples being ‘Trinity’, ‘In Search of Forever’, ‘Mirador’, and so on. It’s not easy to explain but it’s just the quest I’ve had for truth.

I knew from the start that this track needed flowing, windswept keyboard sounds, with snow-tinkling cascades and who better to provide such a service than Oliver Wakeman.  He agreed to get involved and more than that, he arranged the majority of our interpretation and provided a guide track for me to put down some drums.

Oliver suggested David Mark Pearce to meet our guitar requirements.  Then we invited aboard bass player Steve Amadeo (who did a fine job on three of the tracks for 'Trinity' - the Rodney Matthews and Jeff Scheetz with Oliver Wakeman album). I had always envisioned a female vocal on this track, singing three of the five verses.  Oliver contacted Miv Cameron to sing for us and I asked my great niece Charlotte Dickerson to give us the benefit of her lovely voice as well - they perform a stunning duet, with the feel of a mother and daughter singing together.  Finally, with my old friend Pete Coleman, another 'Trinity' stalwart, we were complete!

As you can see, the artwork is complete and reproduction as an open edition giclée print is underway; the music has all been recorded and is due to be mixed and mastered by the end of this week; and Sarah and I have almost finished the design and layout of the packaging.  So, by mid-November - God willing - we will have a packaged CD and a print!  As soon as we have a definitive release date, I will let you know.

I had never heard this carol before so I promptly found and listened to several different versions. I must say it is a beautiful and haunting refrain and I look forward to hearing your interpretation of it. I’m sure it will be as stunning as your painting.

My favourite carol, delighted to see it through your eyes! No idea where we’ll find the room but by hook or by crook this is having space somewhere in the house! Sending love to you both. :) Xx

What an excellent project, one of my favourites along with “three ship … “